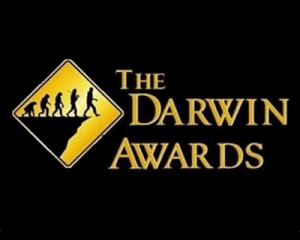 Some of the funniest things I’ve ever read are about the antics of some of the Darwin Awards contenders. If you’ve already heard about these awards, you’ll understand. If you haven’t, read some!

This incident wasn’t officially entered because it didn’t meet the essential criteria. It is, though, my personal favourite.

Coming to a Sticky End

Vermont native, Ronald Demuth, found himself in a difficult position while touring the Eagle’s Rock African Safari (a zoo) with a group of thespians from St. Petersburg, Russia. Mr. Demuth went overboard to show them one of America’s many marvels, demonstrating the effectiveness of Crazy Glue … the hard way.

Apparently, Mr. Demuth wanted to demonstrate just how good the adhesive was, so he put about 3 ounces of the adhesive in the palms of his hands, and jokingly placed them on the buttocks of a passing rhino. The rhino, a resident of the zoo for thirteen years, was not startled initially, as it has been part of the petting exhibit since its arrival as a baby. However, once it became aware of its being involuntarily stuck to Mr. Demuth, it began to panic and ran around the petting area wildly making Mr. Demuth an unintended passenger.

“Sally [the rhino] hadn’t been feeling well. She was very constipated. We had just given her a laxative and some depressants to relax her bowels, when Mr. Demuth played his juvenile prank,” said James Douglass, caretaker.

During Sally’s tirade two fences were destroyed, a shed wall was gored, and a number of small animals escaped. Also, during the stampede, three pygmy goats and one duck were stomped to death. As for Demuth, it took a team of medics and zoo caretakers to remove his hands from her buttocks. First, the animal had to be captured and calmed down. However, during this process the laxatives began to take hold and Mr. Demuth was repeatedly showered with over thirty gallons of rhino diarrhea.

“It was tricky. We had to calm her down, while at the same time shield our faces from being pelted with rhino dung. I guess you could say that Mr. Demuth was in it up to his neck. Once she was under control, we had three people with shovels working to keep an air passage open for Mr. Demuth. We were able to tranquilize her and apply a solvent to remove his hands from her rear,” said Douglass. “I don’t think he’ll be playing with Crazy Glue for a while.”

Meanwhile the Russians, while obviously amused, were also impressed with the power of the adhesive.

“I’m going to buy some for my children, but of course they can’t take it to the zoo,” commented Vladimir Zolnikov, leader of the troupe.