The thing that makes me laugh more often, for longer, and more uncontrollably than anything else is a show on BBC Radio 4 called “I’m Sorry I Haven’t A Clue“. It’s not unusual for me to be in tears or unable to breathe because of something that has been said. ISIHAC is a bit of a Marmite show … you either love it or you hate it. While I can understand people not liking Marmite (well, a bit … I love it) I can’t understand anyone not loving ISIHAC. The show is both silly and clever … very often at the same time.

Many rounds on this ‘antidote to panel games’ don’t sound funny … until you hear the teams actually playing. For example, why should singing ‘One Song to the Tune of Another’ be even the slightest bit funny? Listen to Tony Hawks singing the Smiths’ “Girlfriend in a Coma” to the tune of “Tiptoe Through the Tulips” and you’ll immediately realise that it is. This regular round is usually enhanced by the juxtaposition of the chosen song and tune, such as David Mitchell singing “Whiter Shade of Pale” to the theme from The Muppet Show, or Barry Crier singing “If You’re Happy and You Know It” to Chopin’s funeral march. 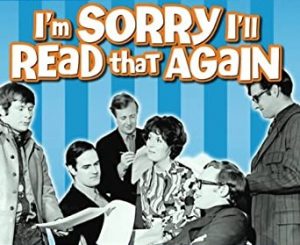 The forerunner to ISIHAC

ISIHAC was preceded by “I’m Sorry I’ll Read That Again”, a successful BBC Radio comedy sketch show which ran for nine series. When several of the cast of this show landed far more lucrative opportunities on television, the format for ISIHAC was proposed. Being for the most part unscripted, the cast could simply turn up, record a show, then go back to the real money-earners.

If you’ve never heard of ISIHAC, you can find out all about it by looking at the entries in the navigation bar above. There’s a synopsis of each broadcast under Shows and under People you’ll find details both of the roles and of the individuals who have filled them. There’s a description of each game – with some examples – under Games where you can also find out which shows they were played on. 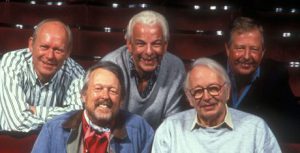 The ISIHAC line-up for many years

There are more than four hundred shows listed here, with who took part, what games were played and a few highlights from each. However, this is a ‘work in progress’ and not all information for all episodes has been entered yet. It may take a little time! Mostly these are regular shows, but there are also a few specials. Most specials are compilations of the best bits from a year’s series. However, there have also been a few special specials.

I’m Sorry I Haven’t A Christmas Carol and Humph In Wonderland were basically traditional stories but featuring popular ISIHAC games. The 30th Anniversary Edition was a special show to mark the event, but was otherwise regular in format and there was a Tribute to Willie Rushton broadcast shortly after his death in 1998. In Search of Mornington Crescent and Everyman’s Guide To Mornington Crescent were specials dedicated to that most popular of games, while I’m Sorry I Haven’t A Desert Island had various celebrities picking their favorite rounds.

If you’re a complete newbie to ISIHAC, sample the show’s flavour by browsing here. If you like what you’re seeing, check out the shows themselves. Funny as the remarks are in writing, they’re infinitely more so as delivered by the cast. I’m sure that regular listeners will, like myself, hear the words on the pages here delivered in the voices and styles of the speakers, and consequently get so much more out of them. Start right back with the early shows, so you can hear the in-jokes and references developing. I wouldn’t, though, recommend going all the way back to the very beginning, at least not at first. The first couple of series were not, in my opinion, all that good. Luckily someone at the BBC had the wisdom and foresight to persevere, and let the show blossom into the absolute gem that it became.

The BBC has released several CDs from the show – specials, compilations, and whole editions. You can find out what’s been published under CDs but I haven’t yet gone into detail of the content of each. I’ve accumulated a few duplicates of some of these, which are for sale in the shop.

Many episodes can also be found online and downloaded as torrents. Some of the shows you’ll find this way are mislabelled as to which episode they are, but that only annoys anally retentive purists like me, it doesn’t detract from the hilarity of the material and – hey! – if you too catch the bug completely, you can always come back here to check a show’s credentials.