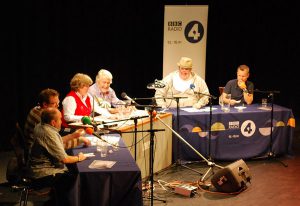 News Quiz regulars, during one of the show’s recordings


For very many years, The News Quiz has regularly filled the 6:30pm Friday comedy slot on BBC Radio 4. Although the show began five years after ISIHAC, in 1977, it often has more series each year, meaning that the total number has now entered triple figures. Each run is usually considerably longer too, so the number of shows transmitted will soon be into four figures.

The show takes a satirical look at the week’s news. It still maintains the quiz format that it started out with, though nowadays the competition element is not really relevant. It’s just a vehicle for a tongue-in-cheek look at the events and the people in the news that week.

Another change over the years, in my own opinion not for the better, has been the replacement of print and television journalists as panellists with comedians. In the earlier shows, there was a freshness to hearing from people you weren’t all that familiar with. Sometimes, of course, they weren’t as funny as the professional comedians are, and occasionally they might sacrifice comedic value to make a serious point, but I miss them. Frequently, though, a journalist proved to be an inspired choice, showcasing such nuggets as Alan Coren, Richard Ingrams and Simon Hoggart. Even some politicians, somewhat unexpectedly, shone. Roy Hattersley and Charles Kennedy made frequent appearances, revealing unexpectedly laid-back personas far removed from what was presented in parliament.

The shows are topical at the time of transmission; sometimes too much so, with it being a running joke that shows are recorded on a Thursday and transmitted on the Friday. This can be especially pertinent during elections as the show is being recorded while people are still voting, while the results are known by the time it airs. Further opportunities for confusion are offered by whether one is listening to the original broadcast, or the repeat. One of my favourite examples of this was: 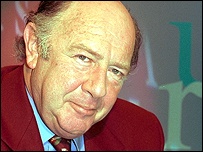 Although the subjects and people discussed are ‘of the moment’ the humour stands the test of time well, with shows from the ’70s and ’80s being as funny now as when they first aired, though it probably helps to have some memory or knowledge of the subject matter.

The panellists’ observations are always amusing and good for at least a chuckle or two, but the real belly laughs often come from the cuttings listeners send in, read by a variety of BBC continuity announcers. These usually open and close every show and precede each round. Being a particular favourite of mine, they’re heavily featured thoughout this section.

All of The News Quiz shows are, or will be, listed here from the very first to the very latest. The amount of detail given for each varies from the very basic, for shows I don’t have a copy of, to fairly detailed for those I do and that I’ve finished adding information for.

For each show I’m aiming to list who took part and who helped create it, as well as what was talked about and the clippings read out, but this is a work in progress and as the current website difficulties have put me back virtually to square one for this show, I suspect it will take a considerable time to get back up-to-date with even the basic information. Also, although I’m reasonably sure that the episodes I have are attributed to the right series, I’m not entirely convinced each episode is correctly numbered so am trying to verify each by matching topics discussed to real news items. As you’ll no doubt appreciate, this is no small task! See this episode for an example of a completed entry.

Shows fall into two categories: regular editions and specials. Defining regular shows is easy; they’re the editions broadcast when a series is on air which follow the standard format. A chairman asks questions about the week’s news and two teams of two answer them. Defining specials is a little more complex. There are three types of special:

The News Quiz of the Year: There are actually two types of these: compilation shows and shows which follow the standard format but look at the year’s news rather than the week’s. Compilation shows are a collection of the best bits from that year’s series. Sometimes there are two of them, transmitted around Christmas Day and New Year’s Day, sometimes just one. If there’s just one show, it has sometimes been an hour long instead of the normal thirty minutes.

Shows marking special events: These are pretty rare – only four in total. Two have been tribute shows marking the passing of and contributions by Alan Coren and Linda Smith, one to celebrate Twenty Five Years of the News Quiz and The Millennium News Quiz broadcast at the end of 1999.

Shows with special formats: These are even rarer than those marking special events – only two so far. Oh no it isn’t … The News Quiz was a pantomime featuring many of the show’s regulars at the time. The News Now Quiz Show brought regulars from The News Quiz and The Now Show head to head.

Feel free to let me know if you spot any typos, outright errors or other weird s-t-u-f-f. (Actually, I don’t make errors … just really BIG typos sometimes!) Leave a comment on the relevant page or contact me privately.