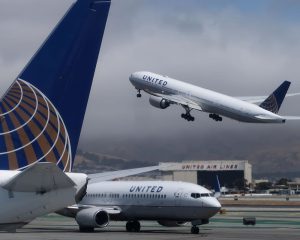 I can’t, unfortunately, remember the original source of this story of solidarity on a United Airlines scheduled flight, only that it was retold on BBC Radio 4.

Taking advantage of his employee’s free flight entitlement, Mr. Gay boarded his flight a little late to find that another – fare paying – passenger had taken his seat. Not wanting to cause a fuss, he simply found a vacant seat nearby, and settled down to await take-off. Shortly after, he noticed a member of the cabin staff approach the unwitting passenger who was sat in the seat allocated to him. The flight had become over subscribed, and it had been decided to bump those passengers travelling on free/stand-by tickets.

“Are you ‘Gay’?” asked the flight attendant of the hapless pessenger. After a short hesitation, he nodded and mumbled an embarrassed “yes”.

“I’m afraid I’m going to have to ask you to disembark this flight” the flight attendant advised the passenger. Realising there had been a misunderstanding, Mr. Gay immediately stood up, and called to the attendant “I think there’s been a mistake – I am ‘Gay'”.

At this point a third voice, having overheard the exchange, yelled indignantly from somewhere at the back of the plane.