To those not blessed by being born English cricket may be a little confusing, so here’s an explanation of how the game is played: 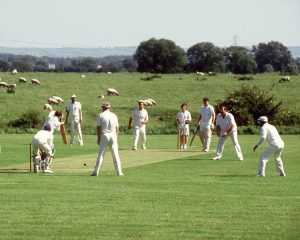 You have two sides, one out in the field and one in. Each man that’s in the side that’s in goes out, and when he’s out he comes in and the next man goes in until he’s out. When they are all out, the side that’s out comes in and the side thats been in goes out and tries to get those coming in, out. Sometimes you get men still in and not out. When a man goes out to go in, the men who are out try to get him out, and when he is out he goes in and the next man in goes out and goes in. There are two men called umpires who stay out all the time and they decide when the men who are in are out. When both sides have been in and all the men have been out, and both sides have been out twice after all the men have been in, including those who are not out, that is the end of the game.