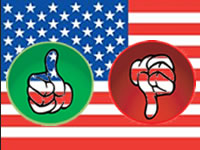 I’ve never really liked America. Actually, it’s Americans that I’ve never liked. I’ve got nothing against the earth that makes up the country. I’m sure it’s very nice earth, and no better or worse than that which makes up England, or even Europe.

Having said that, I’ve never met an American that I didn’t like. Often, greatly so. This tends to make my dislike seem irrational and unfounded. At least, so I thought, until I met someone who told me an interesting fact. Less than 10% of Americans have passports. (It was an American who told me this, really nice guy.) This explains a great deal, and I’ve qualified my dislike somewhat. Now I only dislike Americans who stay there, not those who travel to other places.

Logically there must be some rational reason why I feel like this, other than my innate reaction to their having kicked us out a couple of hundred years ago. So, also logically, I thought I’d make a list of pros and cons. Results below (it’s unfinished… I’m sure I’ll think of other things to add to both sides at a later date.)

Hmmm … seems about even. Except that they inflicted a President Bush on us TWICE. I suspect the second one was only to make the first one look ‘okay’.   …   On the whole, I think I’ll carry on disliking most of them in theory, and liking the ones I actually meet in practice.