WITH A LITTLE HELP

Police in Oakland, California spent two hours attempting to subdue a gunman who had barricaded himself inside his home. After firing ten tear gas cannisters, officers discovered that the man was standing beside them shouting, “Please come out and give yourself up”.

NOT THE SHARPEST KNIFE

In Modesto, CA, Steven Richard King was arrested for trying to hold up a Bank of America branch without a weapon. King used a thumb and a finger to simulate a gun, but unfortunately he failed to keep his hand in his pocket.

DID I SAY THAT?

Police in Los Angeles had good luck with a robbery suspect who just couldn’t control himself during a lineup. When detectives asked each man in the lineup to repeat the words, “Give me all your money or I’ll shoot,” the man shouted, “That’s not what I said!”

A man walked into a Topeka Kwik Stop and asked for all the money in the cash drawer. Apparently, the take was too small so he tied up the store clerk and worked the counter himself for three hours until police showed up and grabbed him.

WHAT WAS PLAN B?

An Illinois man pretending to have a gun kidnapped a motorist and forced him to drive to two different automated teller machines. The kidnapper then proceeded to withdraw money from his own bank accounts. 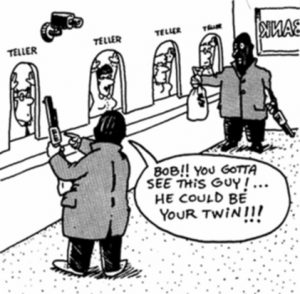 Not the first to be caught out by a selfie, and probably not the last, Ashley Keast used a stolen SIM card to snap a self portrait inside a house he was burgling. The Rotherham man then posted the picture on the Whatsapp messenger application – but also unknowingly sent the picture to the victim’s work colleagues. Officers found him at his home with a stolen Rolex watch, worth £4,000, hidden behind a radiator. Keast, then 25, was jailed for two years and eight months in 2014 after he admitted burglary.

An elderly lady did her shopping and, upon returning to her car, found four males in the act of leaving with her vehicle. She dropped her shopping bags, drew her handgun, and proceeded to scream at them at the top of her voice:

“I have a gun and I know how to use it! Get out of the car, you scumbags!”

The four men didn’t wait for a second invitation, but got out and ran like mad. The lady proceeded to load her shopping bags in the back of the car and get into the driver’s seat, but was so shaken that she couldn’t get her key into the ignition. She tried and tried, to no avail. And then it dawned on her why. A few minutes later, she found her own car parked four or five spaces farther down. She loaded her bags into her car and drove to the police station. The sergeant to whom she told the story nearly tore himself in two with laughter and pointed to the other end of the counter, where four pale males were reporting a carjacking by a mad elderly woman described as white, less than five feet tall, glasses, curly white hair, and carrying a large handgun.

No charges were filed.